Given the need for community health care financing Charutar Arogya Mandal, a charitable trust that manages various medical institutions including a medical college and a 800 bed teaching hospital in Karamsad, Gujarat, India, commissioned a small form of a feasibility study of implementing a community based health insurance programme. The study sought to understand the community needs, purchase capabilities and the required medical coverage limit to meet with different segment of the community. The study also included in-depth aspects on the beneficiaries who are likely to get enroll in the scheme, the benefit that are likely to be acceptable to the community and the subscription that they could afford. Encouraged by the responses received through the study, Charutar Arogya Mandal has launched Krupa Arogya Suraksha (KAS) - a social security scheme in the month of August 2003. Keeping in mind the statutory landscape, the Mandal decided to incorporate a separate trust, Shree Krishna Arogya Trust (SKAT), to implement the scheme. The scheme is aimed at extending the safety net of modern health facilities & services to communities living in the villages and towns. 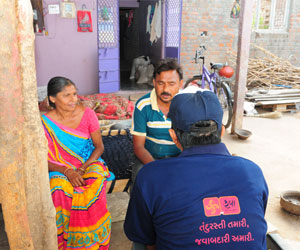 The scheme offers an affordable annual subscription or a single lifetime subscription by an individual or a family participating in KAS for a free, opted amount of treatment for any illness requiring indoor admission at the Mandal's Shree Krishna Hospital or any other hospitals nominated by SKAT. To cater to the need of various age groups and the purchase capacity, the scheme offers a range of annual in-patient coverage i.e. Rs 5000/- to Rs 100000/- with a corresponding annual membership of Rs 99/- to Rs 1759/- for an individual up to 45 years. The scheme is offered to any person between the age of 91 days and 75 years for a range of inpatient coverage.

The scheme has unique and innovative features, which are of benefit to members, especially the rural poor.

"Krupa" – offers such an opportunity in the most democratic way as stated below;

It is a fully voluntary scheme, which offers an individual optimal opportunity to decide about his/her membership.

Does not limit the right of members in making their own choice for renewal and non-renewal of the membership, as it is a periodical membership.

Irrespective of caste, social status and social/financial background, the members have a right to decide whether to take the treatment in the designated hospital, and if so, then seek admission to any ward of the hospital, ranging from general ward to selected wards in Privilege indoor facility.